One of the most iconic of cutthroat, the Yellowstone –Oncorhynchus clarkii bouvieri – has a very limited native range in Utah’s northwest corner. That being said, many Utah anglers have caught Yellowstone cutthroat throughout the state. Records show the first cutthroat from Yellowstone came to Utah in 1903 and were planted by Division of Wildlife Resources fisheries officials. The transplants have been caught by anglers at a variety of lakes and streams across the state. In fact, the state record cutthroat trout caught in 1930 at Strawberry Reservoir – all 26 pounds 12 ounces of it – was either a Yellowstone cutthroat or a mix between a Yellowstone and a Colorado River cutthroat. Strawberry, of course, is still known for its large cutthroat trout, but those fish are also not native to that watershed.

All that being said, the Yellowstone cutthroat will be the most challenging of the four Utah subspecies to land simply because of the remote nature of its native range. 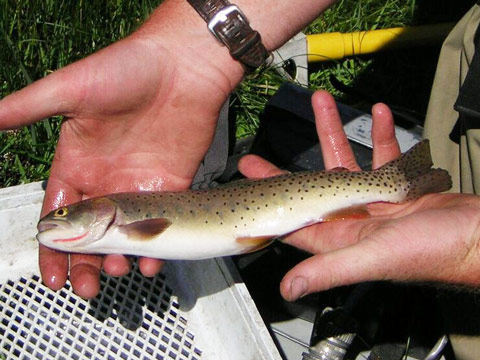 Where to Find Yellowstone Cutthroat in Utah

To zoom in, open dialogue and click on “Yellowstone Cutthroat Trout”

Johnson Creek: Brook trout were chemically removed from this stream in 2013-2014. The genetically pure population of YCT located in the headwaters is beginning to build in numbers and slowly disperse downstream. For the next few years, the concentration of YCT will be in the headwater tributary, the Left Hand Fork, however, YCT will be present throughout the Sawtooth National Forest portion of this stream in the near future.

Wildcat Creek: Yellowstone cutthroat trout are the only species of trout in Wildcat Creek on the Sawtooth National Forest. The population of YCT has been depressed since a wildfire in the mid 2000s, however YCT that would have been lost in the chemical treatment of Johnson Creek recently were transplanted into Wildcat Creek during 2012-2013. These fish should help this population continue to build post-wildfire. The best bet to catch fish in this stream is in the headwaters, downstream from the two headwater forks. Angling conditions can be tough as Wildcat Creek is a small, brushy stream.

For those unfamiliar with this part of Utah, please contact the Northern Region Office (801-476-2740) and ask for a fisheries biologist that can discuss streams in the Raft River.

The Avenza Maps mobile app allows you to track your location while navigating a map of the area. 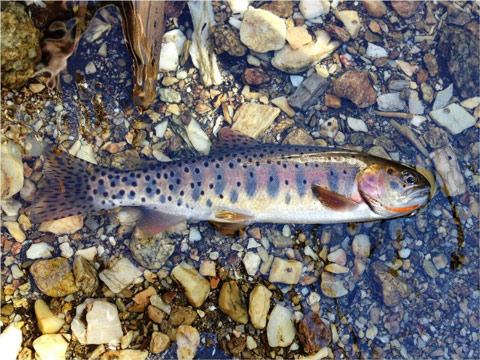 Found only in extreme northwest Utah

Due to its abundance in Yellowstone National Park, probably the most photographed and famous of cutthroat trout varieties

Once stocked in waters across Utah. State record cutthroat from Strawberry Reservoir was likely a Yellowstone.