Your Support is Needed

Since 2004, TU has become a leader in restoring Utah’s coldwater rivers and streams.  Our goals in the state are to improve fishing opportunities for the people of Utah, to conserve valuable native trout, and to share the value of Utah’s rivers and streams to our communities.

This typically involves working with our friends in the agricultural and water community emphasizing solutions that make sense for all partners involved.  The strength of our work lies in the strength of our partnerships, which typically encompass a wide range of private landowners, businesses, local foundations, federal and state agencies and partnering conservation organizations.

Some examples of our work:

Thanks for your support, tight lines!

What’s the story behind our native trout and what’s the status of cutthroat trout in Utah today?

Unfortunately, when the genetics of a cutthroat trout population has been compromised or non-native trout have become established, the only course of action to restore streams or drainages back to what occurred there historically is through the removal of all fish from those systems and the restocking of genetically pure native cutthroat trout.  The UDWR completes these projects by dripping small amounts of a chemical called rotenone into these streams that are targeted for native cutthroat trout restoration.  Over the past 40 years, the Division has completed many of these projects and increased the number of stream miles occupied by cutthroat trout significantly.  In fact, more than 250 stream miles have been reclaimed for Bonneville/Bear River cutthroat trout through time.

About 75% of Bonneville/Bear River cutthroat trout’s historical range occurs in Utah, so these native fish restoration projects played a major role in the decision by the United States Fish and Wildlife Service (USFWS) to not federally list this subspecies as threatened.  This fish has been petitioned twice and in 2001 and 2008 the USFWS felt populations in Utah were doing well enough to not warrant listing under the Endangered Species Act. Similar efforts have occurred with Colorado River cutthroat trout throughout eastern and portions of southern Utah.  While Utah does not contain the majority of CRCT historical range, the efforts by our biologists were a large part of why the subspecies was not deemed warranted for listing in 2008.

These projects in conjunction with habitat improvements and protections have secured populations of our native cutthroat trout for generations to come and helped keep these fish from needing federal protection under the Endangered Species Act.  In fact, Utah’s efforts have increased in the past few years with the work being done in the Bear River and Weber Drainages for BCT as well as the Green River and Colorado Drainages for CRCT.  Utah has been recognized throughout the west as a leader in cutthroat trout conservation. These decisions demonstrate that proactive conservation efforts by the Division, TU, and their partners are recognized and acknowledged as effective and beneficial. 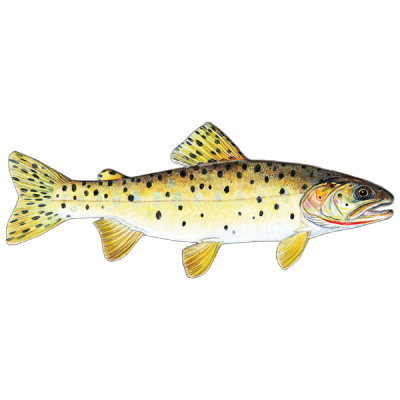 Ready to Start Your Slam?